The Genesis of Barbados Surfing 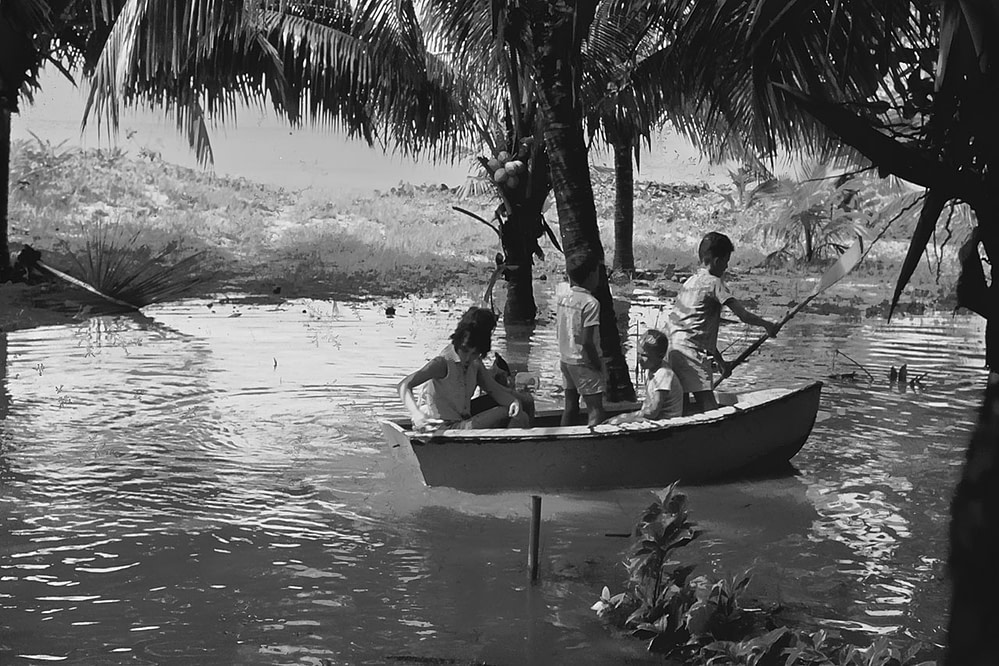 Born American I grew up Bajan, with sand between my toes!

From 3 yrs old I was in and around the sea of Rockley Beach – freedom like nothing else possible. It was our safe pathway to go from the Hotel Royal at Hastings Rocks up to Crystal Waters or St Lawrence Gap.

Enough said – we grew up in the sea and around boats and were either swimming, body surfing or body boarding when waves were breaking at Rockley Beach.

The grown ups all spent time body surfing or body-boarding so 'shooting waves' was something that was always done!

My parents had joined the Yacht Club and my Dad wanted to sail in the 'Sprat' class so he had the shipwrights east of Oistins build the sailing dingy he called PeeWee. My brother and sister, John and Lois, got to crew with him a few times, but I was ill at the time.

"Don't eat chicken-sh*t mixed with dead sand from under a chicken coup on a dare from your 2nd cousin!"

By about Easter 1964 Peewee had been a bit neglected and had got some rot – John (age about 15) got out his practical engineer self and grafted in a new transom and other bits.

While he worked in the gallery we had the top 100 on the radio on Saturdays - these were the days when the Beatles had from #5 all the way to #1 in the top 10 and many others further down the charts and on their way up  – very exciting days – finally music that grabbed you.

Once repaired John set her up with the Seagull outboard engine my Dad had and we were ocean mobile – yeah! We would cruise from Rockley up to Enterprize and we did a trip down to Blue Point near Gibbs on the West coast.

We had seen PanAm travel movies of Hawaii that led us to believe that the waves in Barbados were too small to stand up surf.

This view changed after John saw two guys surf at Rockley. He spent his Easter holidays building 'the red board' and Val and Alan Knowles and William Tomlin and others came by to check it out.

Surfing progressed very quickly with probably upwards of 40 people starting surfing by the end of summer '65. In Sept '65 Surfer Magazine published the article writen by Phil Wilson that covered the surfploration trip of Butch Linden and Johnny Fain from Southern California

We have recently been able to email Butch Linden and Phil Wilson and they confirm that they visited Barbados in Feb 1965 and continued on to Trinidad Carnival - we plan to add more details to this story going forward.

We had felt that the time line was too compressed, but if that's the visit then John would have had to build the 'red board' in Easter vacation of 1965 (we had felt '64) and have built the yellow board before the end of that same year? Seems too compressed.

Can it be that we went from having no boards at the end of Feb 1965 to having approx. 40 active surfers design and build boards and some actually surfing over-head waves at Batt's Rock as in this image below in less than ten months? - Dec 1965.

These were the early days of surfing and we had great days going on surfaris all over the island exploring for new breaks.  I was lucky that John was old enough to drive and we had got a green Ford Anglia from Leroy Alleyne in 1965 before we moved to Lammings in St. Joseph.

On Board Ra II After Arrival

Learning the Way in The Barbadian East Indian Muslim Community

Ladies of the Land

The Hazards of Running Wild!

Please log in again. The login page will open in a new tab. After logging in you can close it and return to this page.